It was a pleasant return to the ten for three of Tickford Racing’s four drivers on Friday at Barbagallo Raceway, as the team made a noticeable step up the time sheets following difficult rounds in Tasmania and Phillip Island. Cameron Waters (No. 6 Monster Energy Ford Falcon FG X) led the team with the second quickest overall time in Practice 2.

Mark Winterbottom (No. 5 The Bottle-O Ford Falcon FG X) and Chaz Mostert (No. 55 Supercheap Auto Ford Falcon FG X) remained close on the charts through both sessions, improving from the low teens in Practice 1 to sixth and eighth, respectively, in Practice 2. All three drivers will advance to Q2 of Saturday’s qualifying session, which features the same short track qualifying format that debuted in Tasmania last month.

The only Supercars driver making his first appearance at Barbagallo this weekend, Richie Stanaway (No. 56 MEGA Fuels/Tickford Ford Falcon FG X) struggled in the afternoon following a promising morning session that saw him within a tenth of the fastest team car. The Kiwi did not turn a flying lap on green tyres in the second session, and finished Practice 2 P24. 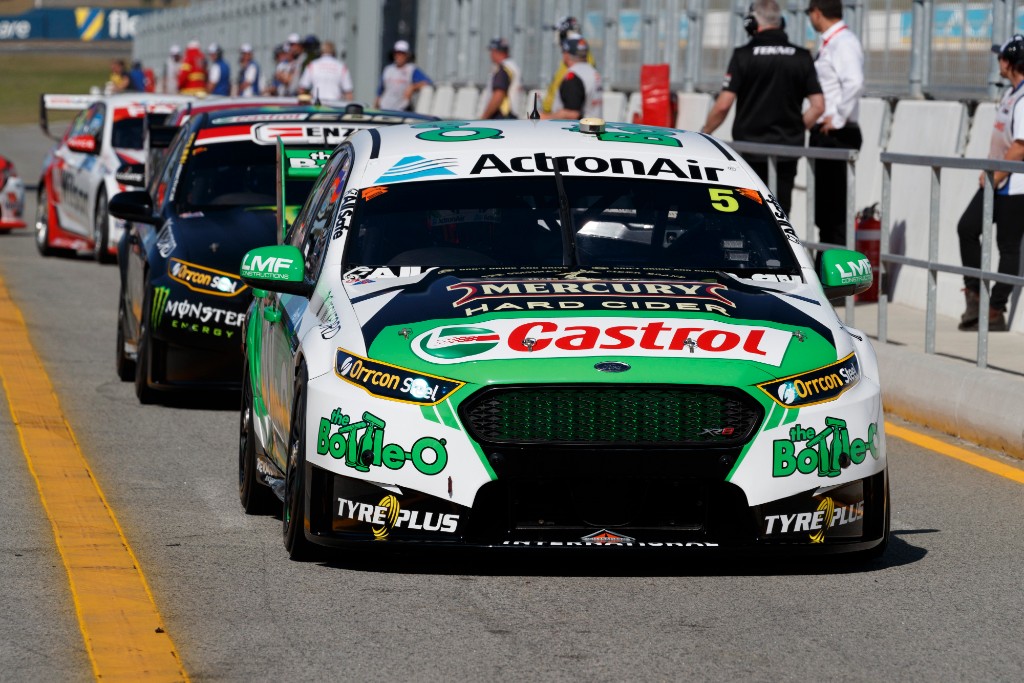 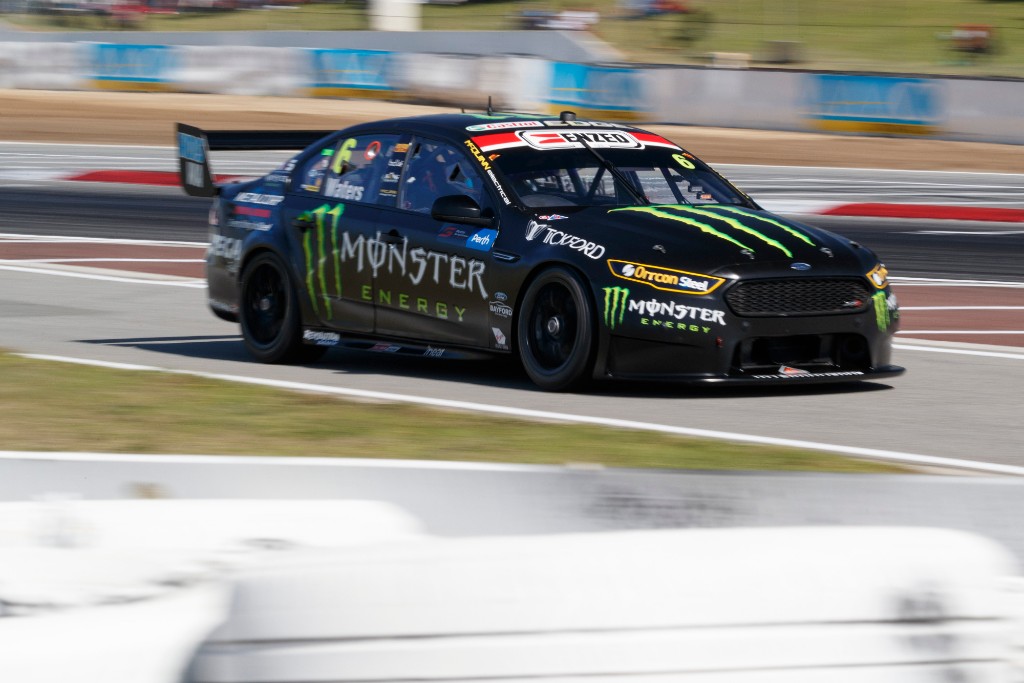 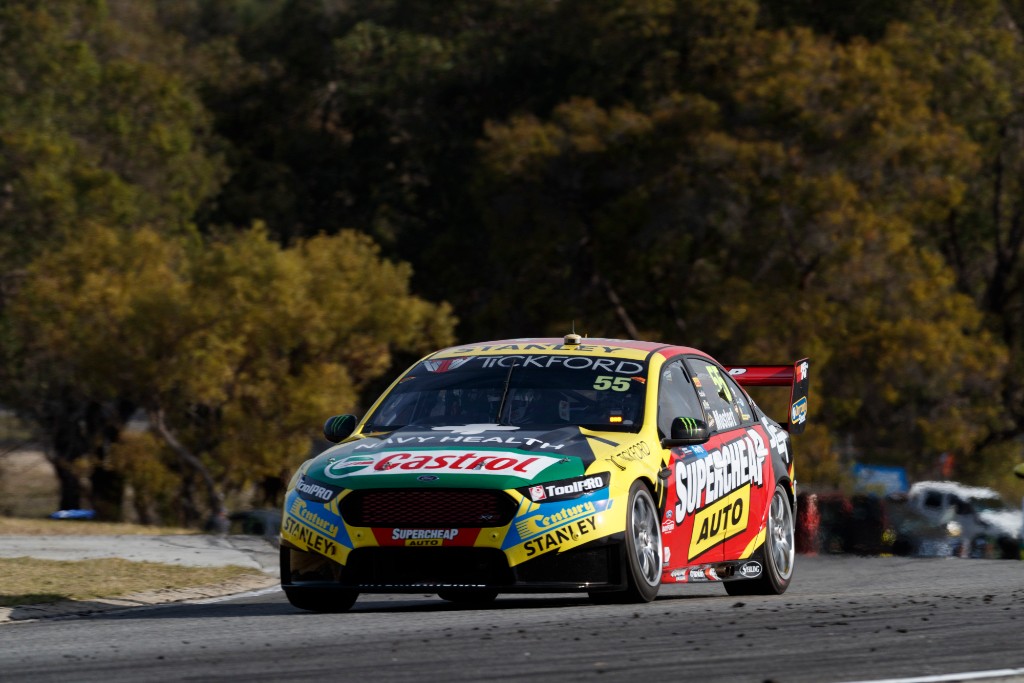 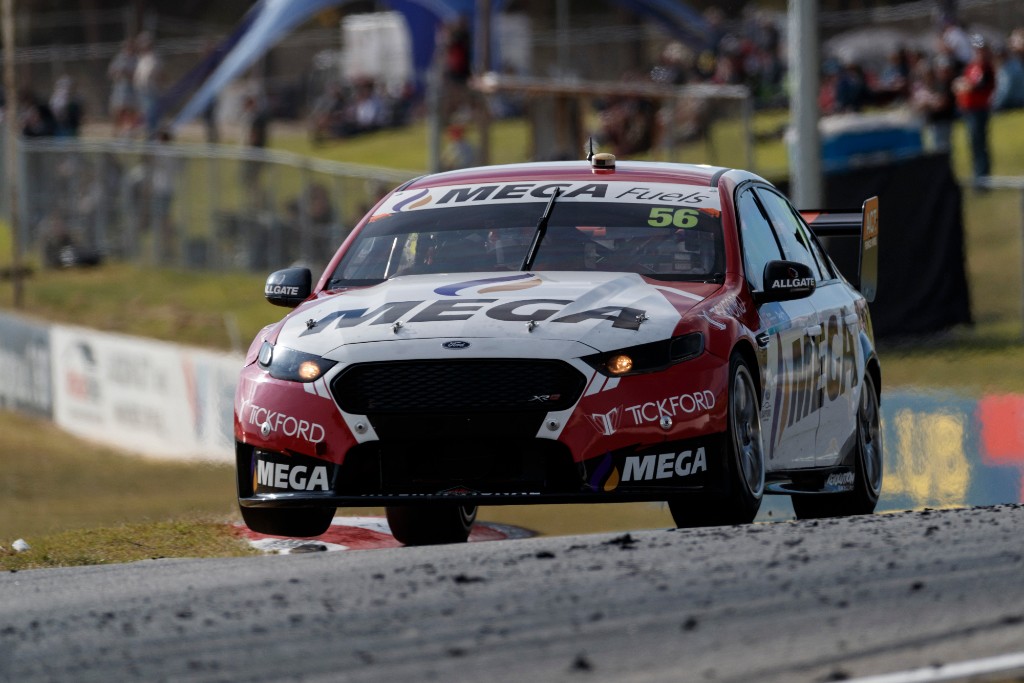 DRIVERS’ VIEW
No. 5 The Bottle-O Ford Falcon FG X
Mark Winterbottom
Practice 1: 14th, 56.20s
Practice 2: 6th, 55.21s
“It was good. We got a little bit of a bum read on the practice tyres, but then we put the green tyres on and the car started to make a bit more sense, so we’ve got some good data now. I’m really happy with how we went, that’s a good effort by the team to turn it around. We’ve only had four or five days to turn it around before this round, so today was a good result, and now we’ve got some good data. I definitely know where we’re losing time, so we’ll get the boys to work, tune her up and go tomorrow. It’s good to be in the ten, it saves us a set of tyres tomorrow, which is hugely important at this track. A good gain for sure.”

No. 6 Monster Energy Ford Falcon FG X
Cameron Waters
Practice 1: 21st, 56.38s
Practice 2: 2nd, 54.91s
“It’s obviously really good for us. Obviously after the first couple of rounds we’ve been to we’ve really struggled as a team. This weekend we kind of took a step back and just tried to get the basics right, and so far so good. It’s only practice, but it’s always good to be up there and not far off (DJR-Team Penske), which they’re really the benchmark at the moment.”

No. 55 Supercheap Auto Ford Falcon FG X
Chaz Mostert
Practice 1: 13th, 56.18s
Practice 2: 8th, 55.33s
“We made the ten, which is good for tomorrow, (but) a lot of work to do tonight. There’s some good things with the car, but we’re just stuck with a few things. I thought we wouldn’t be as weak as the last few rounds coming here, but I want to fix it up a little bit more, so we’ll see how we go.”

No. 56 MEGA Fuels/Tickford Ford Falcon FG X
Richie Stanaway
Practice 1: 17th, 56.29s
Practice 2: 24th, 55.81s
“We didn’t put a proper lap in on new tyres in the afternoon session, which is why we were so far down the order. It’s only practice though, obviously the important stuff is tomorrow, so we’ll see how we go. Obviously my teammates went well today so we have plenty to draw from, and I was right on pace with them in the first session, so I’d like to think we can be right up there with them. We’ll make some changes overnight to the car, and hopefully we’ll string something together in quali to get a good starting position.”

Tim Edwards, Team Principal
“It’s certainly nice to see single digits next to our cars again, but at the same time it’s too early to celebrate. We’ve gone all right here in the past, so we were hopeful coming in that we’d have an uptick in pace. We’re pleased to have better pace today relative to the field, but there’s still plenty of work to do. You don’t win points in practice, so we’ll keep at it tonight and aim for a strong rest of the weekend”

DUNLOP SUPER2 SERIES
Tom Randle echoed his main game teammates’ strong Friday in Perth, notching a pair of top ten results in the day’s practice sessions, winding up fourth in the second session where he sat atop the time sheets for a majority of the time. Having only seen the track for the first time on Thursday, Randle was impressed by the speed of his No. 5 Skye Sands Falcon as he looks to build on a reasonably successful Round 2 at Symmons Plains in Tasmania.

No. 5 Skye Sands Ford Falcon FG X
Thomas Randle
Practice 1: 8th, 58.66s
Practice 2: 4th, 57.88s
“I enjoyed the day. It was my first time here at Barbagallo, so I wasn’t really sure what to expect in terms of the degradation, which I’m certainly still learning. But I was fairly content with how our new tyre run went in the afternoon. I’m happy that we did a new tyre run today, because now I know what I need to work on for tomorrow. To be P4 makes it a bit hard to really know where we are because some other people didn’t run new tyres, but I think we’ve got a good baseline for tomorrow, and we’ll see how the two ten-minute qualifyings go.”