On the fifth day of the fifth month of 2018, Mark Winterbottom’s No. 5 The Bottle-O Ford Falcon FG X brought Tickford Racing its first podium of 2018 with a runner-up finish in Race 11 from Barbagallo Raceway. The result comes in Frosty’s 450th career Supercars race, and is his 117th career podium, the third most in Supercars history.

Winterbottom used a one-stop strategy to score his best finish of the season and led his first laps of 2018 on the day, and was followed home by Cameron Waters (No. 6 Monster Energy Ford Falcon FG X), who started from the front row and brought back a sixth place finish, his best since Race 4 at the Melbourne 400 in March. Chaz Mostert (No. 55 Supercheap Auto Ford Falcon FG X) was in the mix for a top five or even podium after his first stop, but was spun while entering the pit late on Lap 33, costing the Queenslander critical seconds on track. Mostert recovered to score a tenth place finish, his tenth top ten from eleven races in 2018.

Richie Stanaway’s rough rookie season continued on Saturday, as the Kiwi struggled with tyre degradation en route to a 23rd place finish. Like Winterbottom, Stanaway stopped just once in the 50-lap contest, and posted the third fastest race lap, but could not find the consistency in the car to move forward from his 17th place starting spot.

Supercars return to 2.42-kilometre Barbagallo Raceway Sunday at 9:15 a.m. AWST for Practice 4, which will determine the order for Race 12 qualifying at 11:20 a.m. 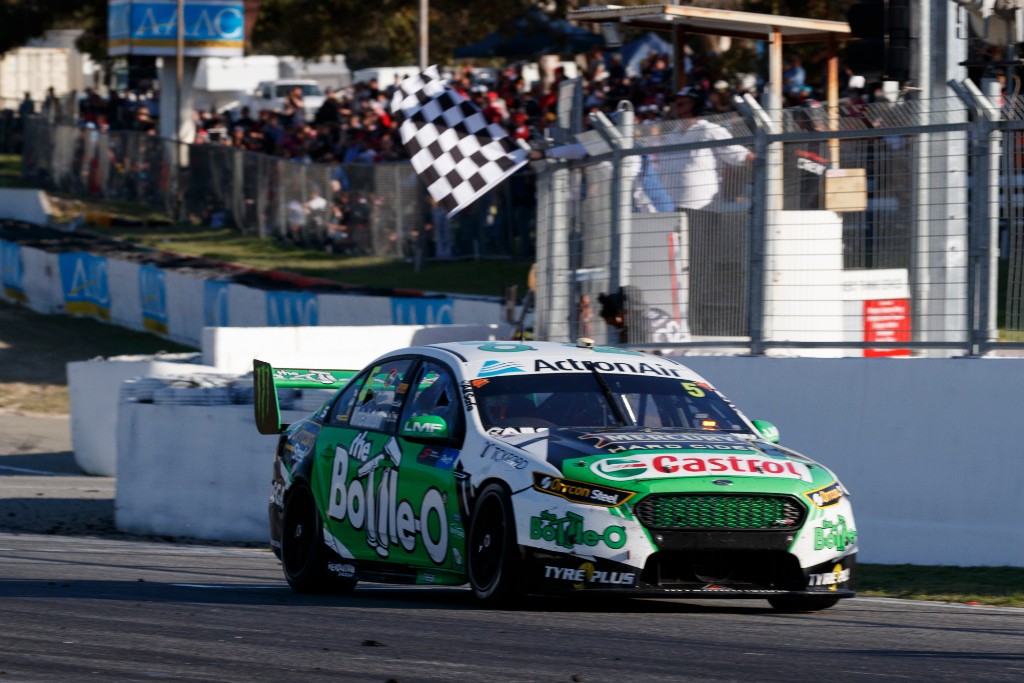 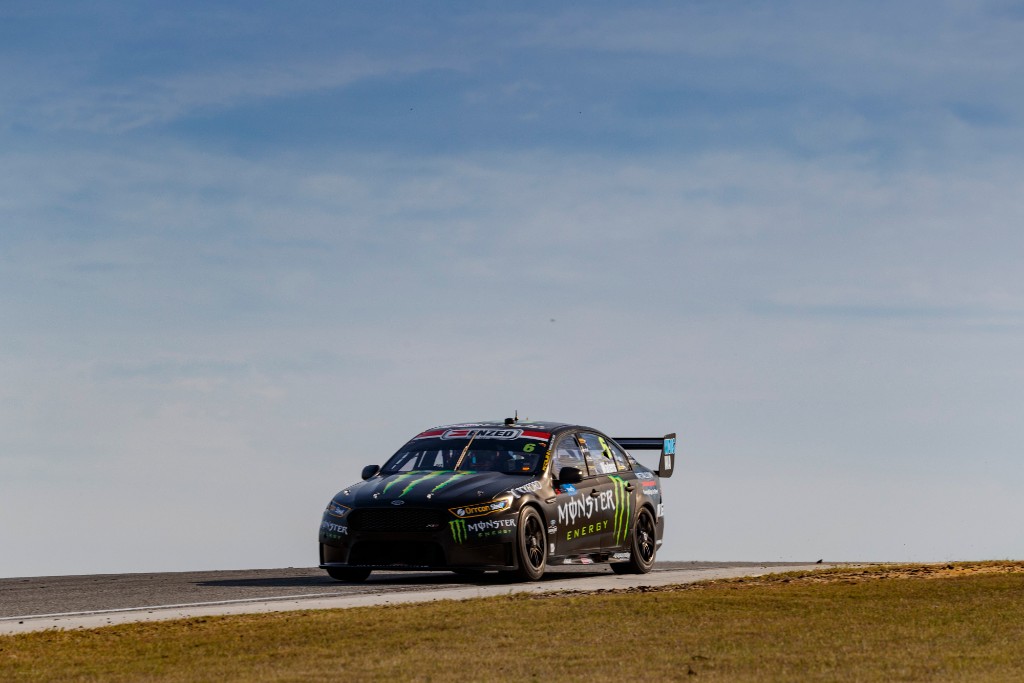 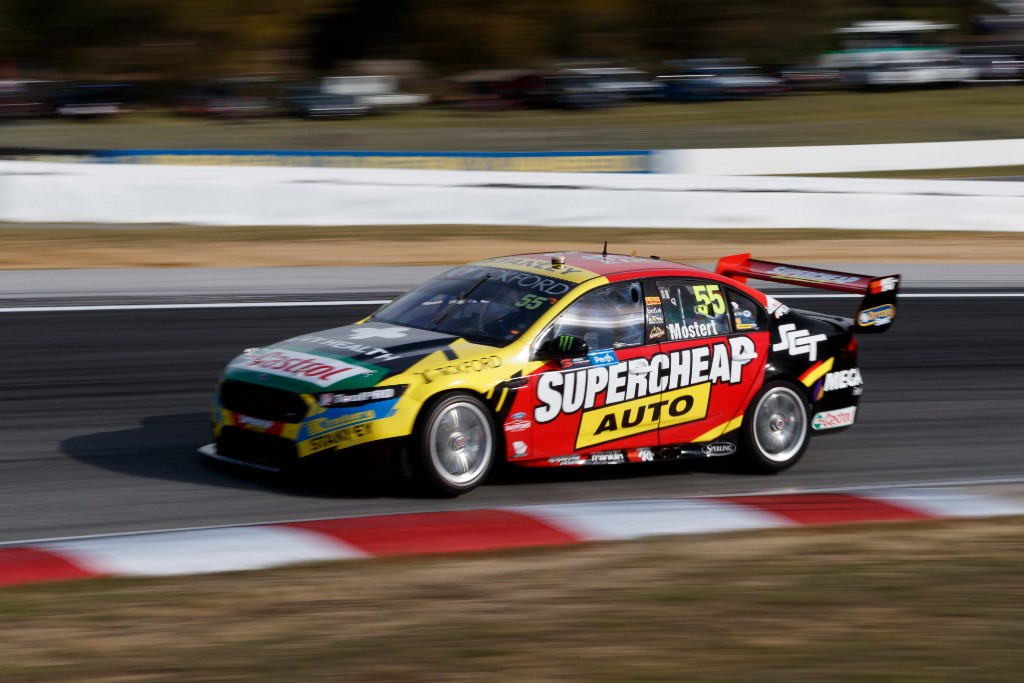 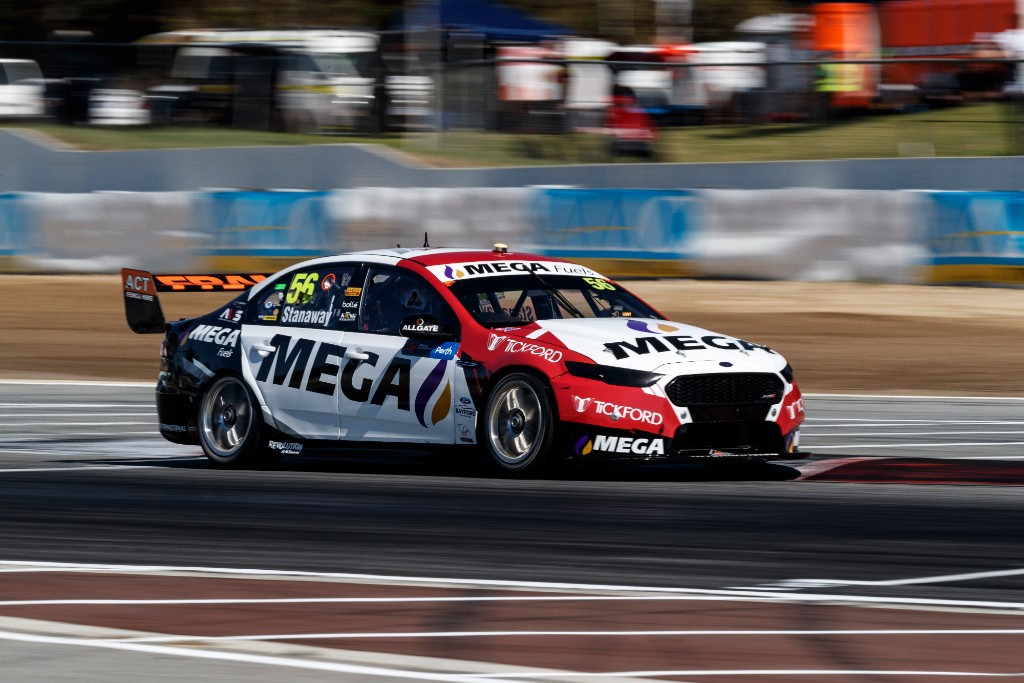 DRIVERS’ VIEW
No. 5 The Bottle-O Ford Falcon FG X
Mark Winterbottom
Race 11 Quali: 4th, 54.73s
Race 11 Finish: 2nd
“The hard part with five races in nine weeks, when you’re struggling you don’t have a lot of time to actually do much development stuff. I think our engineers, in the last four weeks have had about two days off, and that’s a credit to them. We don’t drive any different, do anything different, but they’re putting in the hours, they’re listening to what we’re saying, and it’s a credit to them. I’m really happy for the team. To get a podium is great, to be able to feel the car again underneath you and stuff like that, that’s a good feeling as a driver. Three cars of the four were competitive today, Will (Davison, of Tickford customer team 23Red) was quick as well, so it was a good day for the team.”

No. 6 Monster Energy Ford Falcon FG X
Cameron Waters
Race 11 Quali: 2nd, 54.71s
Race 11 Finish: 6th
“Overall a pretty good day. Qualifying, it was quite good to be second with a pretty good lap and not far off pole. I had probably the worst start I’ve ever had in the race, I’m not sure why but we’ll work that out. The car was okay in the race, I struggled with rear tyre life and that hurt us towards the end. All in all, it’s pretty good to be sixth, seeing where we’ve been, the last two rounds especially, but we’ll make it better for tomorrow.”

No. 55 Supercheap Auto Ford Falcon FG X
Chaz Mostert
Race 11 Quali: 6th, 54.86s
Race 11 Finish: 10th
“It was a tough race. To get tenth in the end was a bit of a bad result in the end from starting sixth. You never want to go backwards from where you start from. We probably would have ended up back where we started if we didn’t get turned coming into pit lane, but that’s racing sometimes. That happens, and you can’t do much about it.”

No. 56 MEGA Fuels/Tickford Ford Falcon FG X
Richie Stanaway
Race 11 Quali: 17th, 55.25s
Race 11 Finish: 23rd
“It was a pretty tough day today. I was hoping just to get through to Q2 in quali which I thought we could do, but we missed out by a hundredth of a second, then I got a bad start off the line and dropped a couple spots. We gambled a bit and only went for one stop, but I just couldn’t manage pace through the race and we ended up P23. Obviously it’s not where we want to be, and we probably should have gone for two stops, but hindsight’s 20/20. We’ll fix the car up overnight and look to go better tomorrow.”

Tim Edwards, Team Principal
“Obviously it wasn’t the perfect race, but it’s good to have cars fighting at the front again. Frosty drove a great race and Brendan (Hogan) called great strategy for him to get him to the front at the end. Chaz getting spun shouldn’t have happened, but I suppose that will happen with the way that pit entry is. Chaz did everything he could. He committed right and hugged the kerb through the corner, it’s just tough when he’s trying to get down to the pit lane while the guy behind him is going at warp speed through the corner. It happened a couple times and Frosty nearly turned (Fabian) Coulthard, so it’s frustrating. (Jamie) Whincup got a penalty and ended up behind Chaz, but it’s unfortunate because it ruined a solid run for him. But all in all it’s good to get a trophy, even though it took longer than we had wanted, and we’ll go for more tomorrow.”

DUNLOP SUPER2 SERIES
Super2 rookie Thomas Randle had his best day of his young career on Saturday, which began with him claiming his first career pole and ended with his best finish of 2018. The 22-year old qualified seventh for Race 7 of the Super2, season on Saturday morning, and immediately followed it by posting the fastest lap in Race 8 qualifying. After dropping one spot at the start of Race 7, Randle picked up two in the closing stages to claim P6 on the afternoon.

No. 5 Skye Sands Ford Falcon FG X
Thomas Randle
Race 7 Quali: 7th,
Race 8 Quali: 1st,
Race 7 Finish: 6th,
“A very awesome day today, I didn’t expect that when I woke up this morning. The Skye Sands Falcon was amazing to drive. I got a bit held up in Q1 on our first flying lap, and around Barbagallo it’s really just one lap you get on the tyres, so that hurt us. We decided to sit out the first half of qualifying 2 and join the pack at the end on our new tyres. I was told (Paul) Dumbrell had done a 56.8 and we’d target a 57.0, and I managed to do a 56.8. I didn’t even know we got pole until I got back to the garage. It’s a credit to the boys for Tickford Racing, and it’s nice to get my first pole around a track I had never driven before yesterday. I didn’t expect pole so early in the season, but now we’ve just got to keep it in that spot for the race tomorrow.

The race itself was pretty good. I didn’t get the best start so I lost a spot early, but in the end I was able to make up a couple positions and finish ahead of my starting spot, which you always want to do. More importantly, I learned a lot about how the tyre degrades around here, which is really good to know for tomorrow. If I can have a good start and keep the lead, that knowledge should help me manage the car better over the run, so we’ll see how we go.”